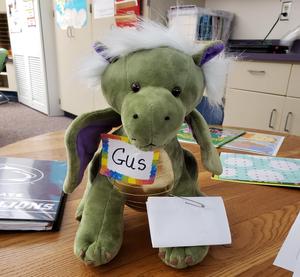 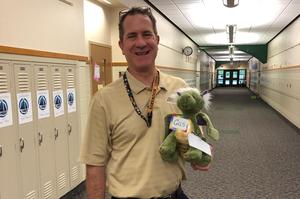 Dix Street 2nd graders welcomed a new student to class this week and are eager to share what they've learned to help him out.
Gus the dragon is Mrs. Cramer's class' phonics mascot. Recently, the class received a letter saying they would be getting a new student. "I told the class that they would need to help Gus catch up on phonics because he wasn't taught it at his last school," Mrs. Cramer says. This week, when students broke into groups, they practiced how to teach the phonics they've had to Gus.
Dix Street principal, Mr. Rollandini, brought Gus to the classroom and sure enough, Gus had a note pinned to him saying that he was glad to be here but needed help with phonics.
"It was pretty fun," Mrs. Cramer says of the activity; it was good for kids to practice what they've learned and neat to share it out in a unique way. Gus created a lot of excitement for the kids, too, which meant a new excitement for their lessons. Gus even has his own locker!
This lesson is modified from one in the Lucy Caulkins Phonics study that our teachers are all using.